You are here: Home1 / Αρθρογραφία2 / Alzheimer3 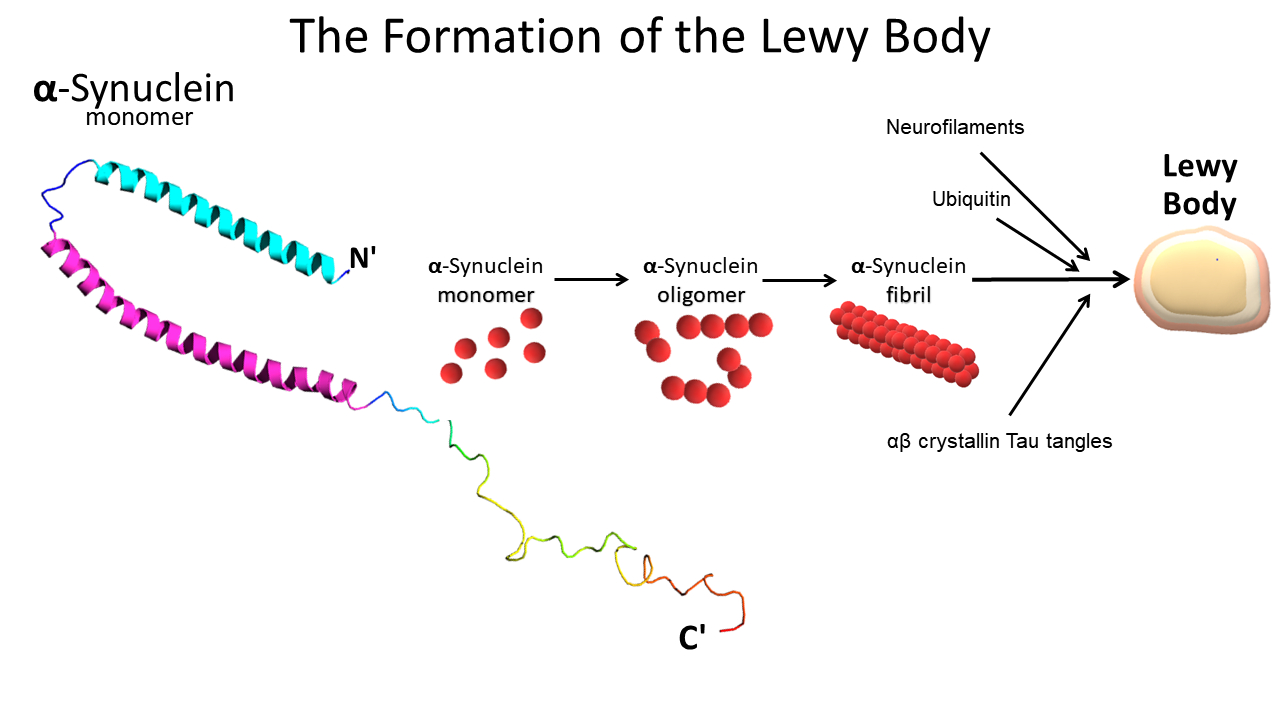 Dementia with Lewy bodies (DLB) is a common clinical entity, which affects many areas of the brain.  Compared to Alzheimer’s disease (AD), Parkinson’s Disease (PD) or Vascular Dementia (VaD) it is less known to clinicians and its complex clinical presentation could make it challenging to diagnose. In the following newsletter article, we will have a journey through the disease’s history, present the current clinical criteria of DLB, describe the core clinical features and the early presentations, review the latest treatments and future research possibilities.

In 1912, Friedrich Heinrich Lewy found the inclusion bodies in the and seven years later Konstantin Nikolaevich Tretiakoff identified the association between them and substantia nigra.  He was the one who named them Lewy bodies (‘’corps de Lewy’’) (Goedert et al., 2013).

Dementia or major neurocognitive disorder (DSM-5) is an umbrella term used for diseases that impact the previous level of performance of patients in one or more cognitive domains (memory, learning, language, attention, executive function, perceptual-motor or social cognition). In order to justify the diagnosis, the deficits should affect the patient’s everyday functioning or domains of daily activities(American Psychiatric, American Psychiatric and Force, 2013).  Currently, 10 million new cases of dementia are being diagnosed every year (World Alzheimer Report 2015, Prince et al., 2015).

The two most common types of dementia are Alzheimer’s Disease (AD) and Vascular Dementia (VaD). The second most common neurodegenerative type and third overall is DLB. Like Parkinson’s Disease (PD), it is characterized by intracellular inclusions mainly composed by α-synuclein (Spillantini et al., 1997; Jellinger, 2017).  These abnormal deposits are called Lewy Bodies (LBs) and can be found in different areas of the brain including the cortex.  The key difference between the two diseases, lies in the distribution of LBs. In PD, LBs are mainly located in the basal ganglia, causing primarily motor symptoms (Braak and Del Tredici, 2017). In DLB, the abnormal deposition of LBs is more widespread and may affect the cerebral, the limbic, the hippocampus, the midbrain and substantia nigra, areas of the brain stem and olfactory pathways (Donaghy and McKeith, 2014). Depending on the brain areas involved, DLB may affect information processing, perception, thought, language, memory, motor, alertness, sleep or smell.

The prevalence of DLB in primary care practice is less than 5% and around 7% in secondary care (Vann Jones and O’Brien, 2014). Unfortunately, neuropsychological tests cannot effectively diagnose this clinical entity and around 20% of DLB patients are being misdiagnosed with other types of dementia, usually AD (Cummings et al., 1994; Kemp et al., 2017; Rizzo et al., 2017; Sadiq et al., 2017). In order to assist the DLB diagnosis, the Newcastle Research group has recently published  the Diamond Lewy – DLB toolkit  (Thomas et al., 2017).

In 2017, the updated Consortium criteria of DLB were published. In DLB, dementia is defined as: a progressive cognitive decline of sufficient magnitude to interfere with normal social or occupational functions, or with usual daily activities (I G McKeith et al., 2017).

The diagnosis of DLB can be probable or possible, based on the number of core criteria and indicative biomarkers. A full list of supportive clinical features, indicative biomarkers and supportive biomarkers can be found in table 1 of the Nature Neurology Reviews website (Arnaoutoglou, O’Brien and Underwood, 2018). Lastly, we have to note that structural brain imaging (MRI/CT scan) may be useful in the differential diagnosis between dementias, as the median temporal lobe is relatively preserved in DLB (Barber et al., 2000; Mak et al., 2014).

These include impulsive changes of concentration, alertness and wakefulness (Tiraboschi et al., 2015).  They vary on the course of the day in an unspecific pattern. During these episodes, ideas seem disorganized, unclear and even illogical. In other instances, the same patient could be alert and be able to have lucid conversations or even watch a film.

Around 70 % of DLB patients experience visual hallucinations mainly in the early stages of the disease. They could be pleasant (animals, choir) but could also be of frightening content. The latter might frustrate the patient and put a burden on the carer and family.

During sleep patients could experience nightmares or even vivid dreaming. This core characteristic was included in the 2017 consensus criteria as REM sleep disorder(Pao et al., 2013).  Other symptoms may include excessive daytime sleeping, insomnia and restless legs syndrome.

Usually motor symptoms are present at a later stage of the disease, even after years. Some symptoms might be like PD and may include muscle rigidity, shuffling gait, handwriting disturbances, reduced facial expressions, difficulty in swallowing and changes in voice. If motor symptoms are misdiagnosed as PD and are treated with antiparkinsonian medication, the psychotic symptoms might increase.

Other behavioural and mood problems

The most commonly met emotional disturbance is depression which is twice more frequent in DLB as compared to AD (Yamane, Sakai and Maeda, 2011; Bronnick et al., 2016).  Other symptoms might include apathy, anxiety, agitation, delusions and increasing suspiciousness/paranoia.

The actual cause of DLB has not been found. We are aware that the presence of LBs is associated with loss of neurons producing acetylcholine and dopamine. Acetylcholine is associated with deterioration in cognition and memory, while dopamine reduction is linked to behaviour changes, sleep, motivation, hallucinations and apathy (O’Brien et al., 2004; Knight et al., 2018). Age is the greatest risk factor.

Genetic studies have shown that homozygosity for the ε4 allele of apolipoprotein E is one of the known risk factors. In some cases, there are some pathogenetic variants, such as CHMP2B, PSEN2, PARK2 and SQSTM1 (Arnaoutoglou, O’Brien and Underwood, 2018). Similar to PD, mutations in the glucocerebrosidase (GBA) gene are a risk factor and associations with APOE genotypes has also been found. Other risks factors may include inflammation processes and early microglia activation(Singleton et al., 2002; Nalls et al., 2013; Shiner et al., 2016).

There is no cure for DLB, but there are medicines and other treatments that can help ameliorate the symptoms of the disease. Due to the frequent visual hallucinations, DLB is commonly misdiagnosed with other types of dementia (e.g. AD), delirium or late onset psychoses. Clinicians should avoid antipsychotics, as second-generation antipsychotics (SGA) significantly increase the mortality in elderly and the risk of EPS and NMS due to population sensitivity.  Memory symptoms of the disease and early visual hallucinations are currently treated with Acetylcholinesterase inhibitors (AChEIs), with the best evidence supporting the use of donepezil and rivastigmine. If perception disturbances are persistent and significantly disturb the patient, then some evidence support the use of low dose quetiapine. The use of memantine is advised in the 2018 NICE guidelines, only when AChEIs are not tolerated (Pink et al., 2018). As sleep disturbances could be an early symptom, low dose of clonazepam is suggested. Nonetheless, both quetiapine and clonazepam might increase the risk of drowsiness or falls, and clinicians need to have the patient’s or family’s consent prior to their use because of the potential risks (Stinton et al., 2015; Ian G McKeith et al., 2017).

In medicine the early detection of patients at risk is imperative. The same principle applies to all mental conditions, dementia and DLB cases. Thus, apart from biological biomarkers, such as DNA, epigenetics, inflammation theories, or imaging techniques, clinicians also need to focus in environmental factors and early changes in cognition and behaviour. The availability of new technologies (internet, machine learning, apps) and the creation of enhanced computerized cognitive tests could help improve the early detection of dementia patients. This multidimensional approach could result in early interventions for dementia, before the presence of significant neuronal loss.